“This Court will be in order,” roared the judge. “Any more outbursts and I’ll lock you up, no questions asked. Is that clear?”
Mrs. Robin and her friends ruffled their feathers in quick response and quieted themselves immediately. But the chipmunks ignored the judge and chittered and whispered under their breath, about a plan to free Chatty.
“I said, quiet!” And the judge banged the gavel again. The chipmunks shrank, and shut up.
“Now, where was I,” muttered the judge to himelf. “Oh, yeah…Mr. Chatty Chipmunk, where were you the morning of May 18?”
“Gathering beechnuts, your honor.”
“Where?” The judge asked sharply. It was clear he was becoming impatient.
“Farmer Shoestring’s backyard,” Chatty responded, becoming more and more frightened. He glanced at his mom behind Slink and Mrs. Gotrocks. Her paws were folded, and he knew she was praying for him.
“Please explain further,” continued the judge. “Today’s complaint is put forward by Mrs. Gotrocks, who lives next door to Farmer Shoestring. Is that correct?”
“Yes, your honor.” Chatty knew immediately what question was next, and he trembled. Furthermore, he remembered he lied to Mrs. Gotrocks, telling her his mom was sick and his brother and sister were starving to death. He could feel the jaws of punishment ready to clamp down, tight.
“She has charged you with trespassing. So, what does she have to do with Farmer Shoestring’s backyard if you were gathering beechnuts in the farmer’s backyard.”
Chatty trembled, and his tail twitched. Just as he was about to tell the judge that he accidentally wandered over to Mrs. Gotrocks’ property, the back door flew open, and in stormed Farmer Shoestring, with Mrs. Shoestring trailing close behind.
“Your honor, I need a say here,” shouted the farmer.
“Who are you? And why are you interrupting the Court?” The judge was not pleased by the intruder. 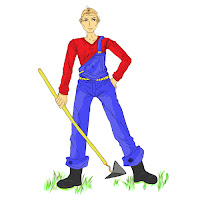 “I’m Farmer Shoestring. And this pest…this chipmunk has been a meddlesome bother to me for years. He pilfers through my strawberry patch, robs my cherry tomatoes, and steals my delicious blue Concord grapes. I say, hang him by his toenails…today!”
Chatty couldn’t squeeze back the tears.  And Mrs. Chipmunk let out a wail. Hulda Shoestring took notice.
“Now, now, your honor,” chimed in Mrs. Shoestring. Farmer Shoestring and I have different opinions about Chatty. I rather like the little chipmunk. Actually, I look forward to see him scampering through our yard.”
The judge had enough and banged the gavel so hard it chipped the podium. “This is the strangest case I’ve ever heard. Is there anyone else who would like a say?”
“I would, your honor.”
“Step forward, Mrs. Gotrocks.”
Slink leaned forward. “Time for the kill,” he said to himself.